I’ll be showing how to use the pydicom package and/or VTK to read a series of DICOM images into a NumPy array. This will involve reading metadata from the DICOM files and the pixel-data itself.

Anyone in the medical image processing or diagnostic imaging field, will have undoubtedly dealt with the infamous Digital Imaging and Communications in Medicine (DICOM) standard the de-facto solution to storing and exchanging medical image-data.

Applications such as RadiAnt or MicroDicom for Windows and OsiriX for Mac, do a great job of dealing with DICOM files. However, there are as many flavors of DICOM as there are of ice-cream. Thus, when it comes to programmatically reading and processing DICOM files things get a little hairier depending on whether the files store the pixel data in a compressed form or not.

There’s a wealth of freely available DICOM datasets online but here’s a few that should get you started:

Despite the fact that its easy to get DICOM datasets, most databases forbid their re-distribution by third parties. Therefore, for the purposes of these posts I decided to use a dataset from an MR examination of my own fat head. You can find a .zip file with with .dcm files on the sagittal plane here. In order to follow this post extract the contents of this file alongside the IPython Notebooks, the contents of which I’ll be presenting in the pydicom Usage section and the VTK Usage section.

In this, first of two posts I will show how to use the pydicom package, which consists of pure-python code, is hosted on pypi, and can be easily installed through pip as such:

As is often the case with many Python packages, while this package is called pydicom it simply goes by dicom within Python and needs to be imported with import dicom.

In this example I’m gonna use the MR dataset of my own head, discussed in the DICOM Datasets section, and the pydicom package, to load the entire series of DICOM data into a 3D NumPy array and visualize two slices through matplotlib. You can find the entire IPython Notebook here.

The only point of interest here is, as I mentioned in the The pydicom package section, that the pydicom package is imported as dicom so be careful with that. Next we use os.path.walk to traverse the MyHead directory, and collect all .dcm files into a list named lstFilesDCM:

If you check the MyHead folder you’ll see that the .dcm files are named MR000000.dcm, MR000001.dcm, etc. Therefore, the walk function will return them in order since they’re sorted lexicographically by the OS. However, in many cases DICOM files don’t have all those leading zeros, with names like MR1, MR2, etc which would result in lstFilesDCM having the filenames ordered in a fashion such as MR1, MR10, MR100, etc. Since, the typical sorting functions in python, such as sorted and the sort method of list objects (docs here), are lexicographical as well (unless dealing with pure numbers), I strongly suggest using the very useful natsort package which can be found on PyPI here (and can be installed with a simple pip install natsort).

Now, lets get into the pydicom part of the code. A notable aspect of this package is that upon reading a DICOM file, it creates a dicom.dataset.FileDataset object where the different metadata are assigned to object attributes with the same name. We’ll see this below:

In the first line we load the 1st DICOM file, which we’re gonna use as a reference named RefDs, to extract metadata and whose filename is first in the lstFilesDCM list. We then calculate the total dimensions of the 3D NumPy array which are equal to (Number of pixel rows in a slice) x (Number of pixel columns in a slice) x (Number of slices) along the x, y, and z cartesian axes. Lastly, we use the PixelSpacing and SliceThickness attributes to calculate the spacing between pixels in the three axes. We store the array dimensions in ConstPixelDims and the spacing in ConstPixelSpacing.

If you were to open one of the DICOM files with an application such as the ones mentioned in the Intro section and checked the metadata you’d see that Rows, Columns, PixelSpacing, and SliceThickness are all metadata entries. pydicom simply creates attributes with the same names and assigns appropriate values to those, making them easily accessible.

The next chunk of code is:

where we simply use numpy.arange, ConstPixelDims, and ConstPixelSpacing to calculate axes for this array. Next, comes the last pydicom part:

As you can see, what we do here is first create a NumPy array named ArrayDicom with the dimensions specified in ConstPixelDims calculated before. The dtype of this array is the same as the dtype of the pixel_array of the reference-dataset RefDs which we originally used to extract metadata. The point of interest here is that the pixel_array object is a pure NumPy array containing the pixel-data for the particular DICOM slice/image. Therefore, what we do next is loop through the collected DICOM filenames and use the dicom.read_file function to read each file into a dicom.dataset.FileDataset object. We then use the pixel_array attribute of that object, and toss it into ArrayDicom, stacking them along the z axis.

And that’s it! Using the pyplot module in matplotlib we can create a nice lil’ plot as such:

which results in the following image: 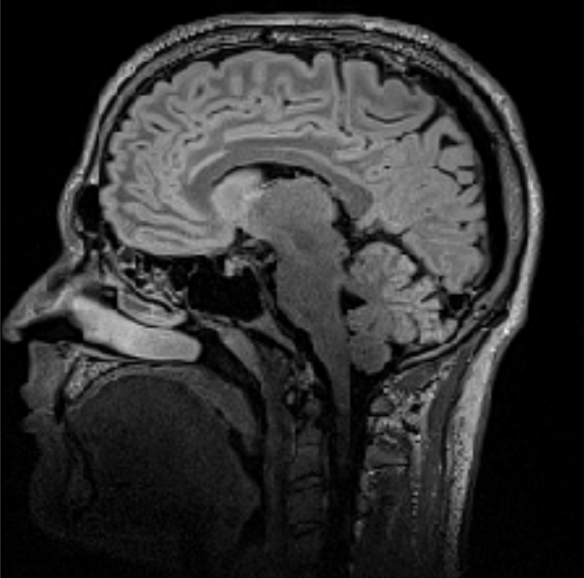 Now while skimming the previous section you might have thought ‘pfff that’s way too easy, why did we bother reading your rants?’. Well, in the interest of keeping you interested, I decided – against my better judgement – to provide the VTK approach to the above process.

You can find a separate notebook here, while I’ll be using the same dataset. Make sure to check that notebook cause I’ll only be detailing the VTK parts of the code here. You will find that the VTK solution is quite a bit more succinct. Now let’s start with reading in the series of .dcm files:

As you can see, unlike the approach in the previous section, here we saved ourselves the two loops, namely populating the filename list, and reading in the data slice-by-slice. We first create a vtkDICOMImageReader object (docs here), and pass the path to the directory where all the .dcm files are through the SetDirectoryName method. After that, its just a matter of calling the Update method which does all the reading. If you were dealing with huge datasets, you’d be surprised how much faster than pydicom VTK does that.

Don’t let the above approach fool you entirely. It worked only cause the OS sorted the files correctly by itself. As I mentioned in the previous section, if the files weren’t properly named, lexicographical sorting would have given you a messed up array. In that case you would either need to loop and pass each file to a separate reader through the SetFileName method, or you’d have to create a vtkStringArray, push the sorted filenames, and use the vtkDICOMImageReader.SetFileNames method. Keep your eyes open! VTK is not forgiving 🙂

Next we need access to the metadata in order to calculate those ConstPixelDims and ConstPixelSpacing variables:

As you can see, the vtkDICOMImageReader class comes with a few useful methods that provide the metadata straight-up. However, only a few of those values are available in a straightforward manner. Thankfully, by using the GetDataExtent method of the reader we get a 6-value tuple with the starting and stopping indices of the resulting array on all three axes. Obviously, that’s all we need to calculate the size of the array. Getting the pixel-spacing is even easier than with pydicom and simply accomplished with the GetPixelSpacing method.

Now, onto the fun part :). You might have read my previous post on how to convert arrays between NumPy and VTK. You might have thought that we can use that functionality and get a nice NumPy array with a one-liner. Well, I hate to disappoint you but it’s not that straightforward (remember, VTK).

If you dig a little into the vtkDICOMImageReader docs, you will see that it inherits vtkImageReader2, which in turn inherits vtkImageAlgorithm. The latter, sports a GetOutput method returning a vtkImageData object pointer. However, the numpy_support.vtk_to_numpy function only works on vtkArray objects so we need to dig into the vtkImageData object till we get that type of array. Here’s how we do that:

As you can see, we initially use reader.GetOutput() to get a vtkImageData object pointer into imageData. We then use the GetPointData method of that object to ‘extract’ a vtkPointData object pointer into pointData. Now, these vtkPointData may hold multiple arrays but we should only have one in there (being the entirety of the DICOM data). Since these ‘internal’ arrays are numerically indexed, we get this vtkArray through index 0 so the array we were looking for can be retrieved through arrayData = pointData.GetArray(0). We can now finally ‘convert’ that pesky array to NumPy through vtk_to_numpy and store it in ArrayDicom. As a final step, we reshape that array using ConstPixelDims et voila!

From that point, we use our lovely NumPy array and get the same plots we got with the previous approach.

Note that we reshape ArrayDicom with a ‘Fortran’ order. Don’t ask me why, but when I tried to reshape in C order I got misaligned rubbish so there. Trial-n-error.

Should you want to learn more about pydicom do check the project’s official website, its wiki, and its user guide.

‘Whoa’ you might say though, what about those JPEG-based compressed DICOM files you mentioned in the intro?. Well unfortunately, neither pydicom, nor the admittedly convenient vtkDICOMImageReader class can handle those. At least, the pydicom package will warn you and return a NotImplementedError upon reading such a DICOM file, while VTK will just return an array full of 0s and leave you wondering. At this point I can only think of two viable solutions to this:

Anyway, enough for today, hope you’ve learned enough to start butchering medical image data on your own, as there are a million awesome things you can do with those. We’ll see a few nifty things in subsequent posts. Next up, I’m going to regale you with bone-chilling tales of marching-cubes and surface extraction :). Thanks for reading!

121 thoughts on “DICOM in Python: Importing medical image data into NumPy with PyDICOM and VTK”